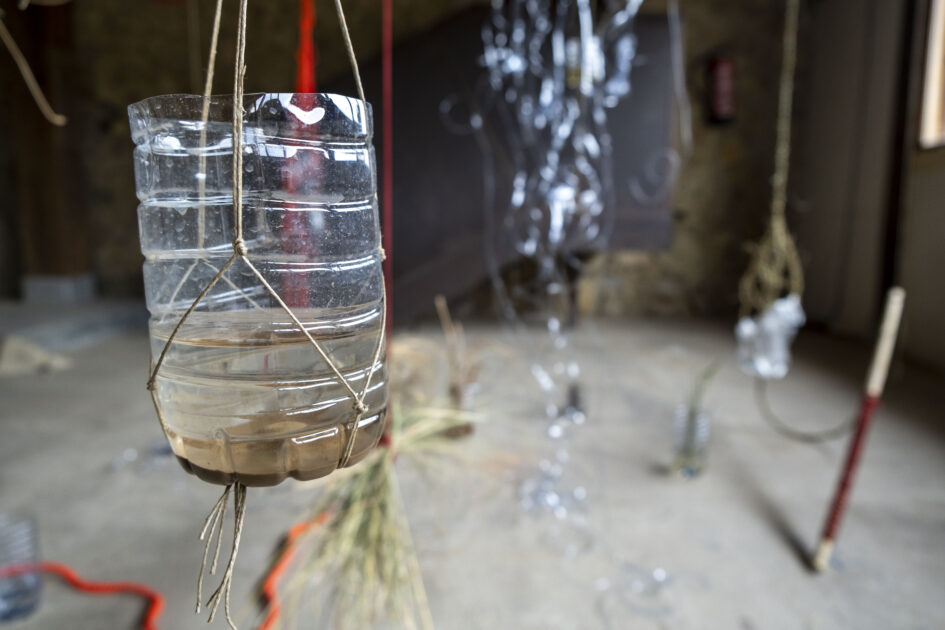 For this installation [krig] has been looking at local fibres found in the surroundings of Blanca to see if it is possible to make thread to work with, introducing also non-natural elements  like the plastic bottles as its extensive presence is making it part of our landscape. Inspired by the doomsday-preppers videos, in which people show pragmatic knowledge to survive in natural environments in moments of crisis, they have found an alignment between their practice and this knowledge. In terms of sound, they have been collecting field recordings of the area with which to compose the soundscape of the installation.

The residency program at AADK in Blanca, Spain, has been and idyllic time to dig into their creative process finding ways to relate with such new environment, at the same time, the constant rain, so rare in this area, as well as the resonance of the war we are now witnessing in Europe, permeates the whole work, overlapping the beauty of the moment with the preoccupation of a convulsive world in which the greed of humankind lid us to conflict and climate change.Still, water reminds us of the complexity of our current reality: being both at the same time, a potential threat as well as the sap of life, it acts as a metaphor of the different directions -terrifying or hopeful- that events can take

This work was developed during the Residency Programme of AADK Spain. with funding from Konstnärsnämnden